The Grossman Method® is a course of study for violinists to learn advanced techniques on the violin while incorporating somatic understanding.  The Method trains violinists to understand the large and small muscle activities needed to execute precise playing in a healthy and aligned manner.  Identifying and relieving unwanted tension in playing is the goal of  The Grossman Method®. 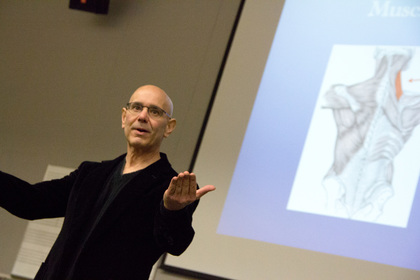 Mus﻿icians in Pain﻿﻿
The Grossman Method© developed over decades of teaching highly gifted and motivated young violinists who came to Mr. Grossman's studio injured or playing in pain. Clearly, the traditional approach of violin teaching, with its focus on small muscle movements of the hands, fingers, and arms, was not enough for these students. Mr. Grossman realized that he needed a different approach so he incorporated his understanding of using large muscle groups with the training of the small muscle movements.


﻿No Pain, ALL GAIN﻿
Mr. Grossman began to incorporate easy and fun stretches during lesson time to help alleviate students’ stiffness, pain and stress, usually while readjusting their hand position. The results were immediate and positive so he created a series of stretches that his students could do themselves during practice sessions and before performances. The stretches were developed specifically to relax tight muscles and reduce performance stress. Those stretches, along with specific breathing techniques to help calm nervous energy, are featured in the No Pain, ALL ﻿GAIN: A Healthy Way to Stretch and Play for You and Your Students workshop. As Mr. Grossman's students became pain-free, he became known as the “fix-it” teacher. Other teachers began to send him their students in order to address a variety of problems from pain to improper alignment to technical advancement. They knew their students would be trained in a systematic and somatic manner.

The Musician as Athlete
Always intrigued by the physical aspect of violin playing, Mr. Grossman was fortunate to study with pedagogues who stressed proper body alignment in violin playing when he was a violin student.  He has supplemented this knowledge with his long term yoga practice, earning his YogaEd certification, his studies of anatomy and bio-mechanics, and studies of Alexander Technique and the Feldenkrais Method. All these, in addition to his years in the studio diagnosing, correcting and eliminating the causes of his students’ pain, led to The Grossman Method®.